Try to ponder a world without blue…

We could never know such thing as emerald leaves
Or ambrosial lavender blossoms on endless fields
No turquoise seas that sparkle in deep grotto's
Or grand Lapis Lazuli temples in old Morocco
11:11
Sometime, during the dawn of humanities awakening
From the womb of creation was sent a dispensation
of the most wondrous cerulean rays to light up the skies
Suddenly we saw everything with brand new eyes

From where did these rays come? Only God knew
What enlightenment was encoded in this strange new hue?
As it descended into our consciousness and into our view
That ray of blue light abruptly split into two

The Alpha and omega blueprint of these rare souls
Source love in Union, counterparts of the whole
The split ripped them apart, left so utterly broken hearted
They would search through eternity for their one true beloved

Cycles and spirals of lifetimes went by
No matter how far we drifted, I still felt his heartbeat in mine
With my head in the clouds as I was looking up at the sky
Per chance one day in the midst of a crowd he walked right by

I may not have recognized him at first because
Sometimes he is a jazzman in the world of ideas.
But mostly he’s a bluesman in the life of the mind
But I heard the unmistakable whisper telling me “You’re mine”

Then, when his eyes met mine, careening through my mind
were brilliant mandalas of diamond and sapphire
Rays of luminous blue light re-ignite
to penetrate our darkness with his rainbow wand of light

The tug of our heart is deep and true
He has been holding a flame for me,
and I for him too

try to imagine the sky if it wasn’t blue 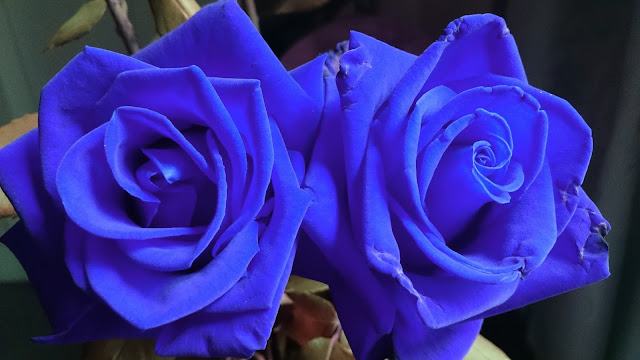 The two lines
Sometimes he is a jazzman in the world of ideas.
But mostly a bluesman in the life of the mind
is a variation of the quote from
Philosopher, civil rights activist and professor
Dr Cornel West

There is a hidden link within the body of the poem
that explains that there really was a time in our history
where people could not see or recongnise the colour BLUE.
Very interesting read.

Posted by Divinia Nightfire © at 4:10 PM

Divinia Nightfire ©
I'm on a journey, which you are welcome to join me on. I'm here on a mission. I'm here to change the world and outdated paradigms of thought...one word at a time. I'm here simply to express myself my way. I see the world colourfully, irreverently, hilariously, seriously, non linearly, contradictory, diametrically, paradoxically, fractaly, seriously, magically, vulnerably, alchemically, holographically but most of all unapologetically.